The brief history and industry prospect of playground equipment in China

With the sustained and healthy development of China's economy and the continuous improvement of people's material living standards, China's demand for children's playground parks is also increasing. Playground parks are gradually becoming a new type of entertainment products, and gradually form a diversified combination with the development environment such as education, countryside, vacation and IP. 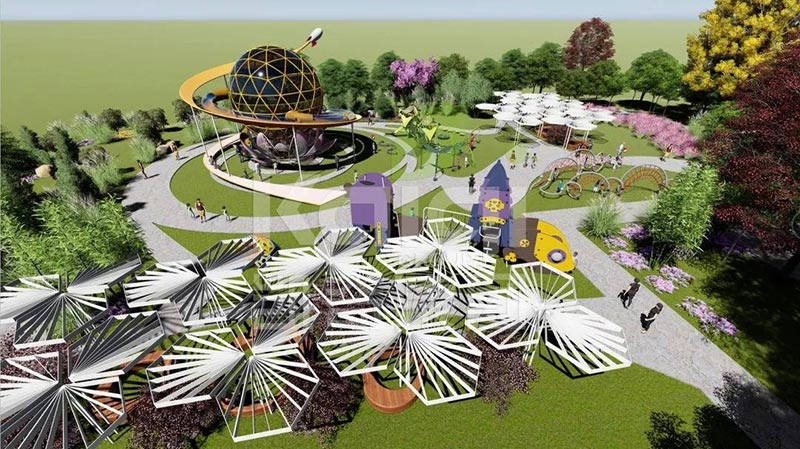 Development and evolution of Playground Equipment

Since China's reform and opening up in 1978, the economy has developed rapidly in recent 40 years, and China's playground equipment industry has developed from scratch. At present, it has developed into an industry with an annual output value of tens of billions.

In the 1980s, two important events that marked the start of children's playground were the establishment of relevant industry associations.

In 1986, China Toy and Juvenile Association (formerly known as "China Toy Association") was established. With the approval of the state owned assets supervision and Administration Commission of the State Council and the Ministry of civil affairs, it was officially renamed China Toy and Juvenile Association from June 24, 2011. On August 1, 1987, China Association of Amusement Park Attractions was established.
As the largest and earliest production base of playground equipment in China, a large number of enterprises in Qiaoxia Town, Yongjia County, Wenzhou began to manufacture and sell playground equipment in the 1980s and 1990s.
In July 2006, Qiaoxia Town, Yongjia County, Wenzhou was awarded as Town of Educational Toy in China by China Toy Association (successfully passed the re evaluation in June 2009).

2 Development and popularization stage -- 2000s
In the 21st century, China's playground equipment industry has entered a period of rapid development, and industry manufacturers have gradually realized large-scale production. The product line has grown from scratch, and the market scope has extended from the most economically developed Pearl River Delta, Yangtze River Delta and Bohai rim economic circle to land areas in China, and even to villages and towns.
At the same time, playground equipment made in China began to enter the overseas market. Now, made in China is everywhere on all continents of the world.
With the rapid development of the industry, national standards and industry standards related to playground euqipment have been gradually introduced, which has greatly promoted the product quality standards and industry development level.

3 The stage of reform and Innovation – 2010s
With the rapid development of the Internet and the advent of the information age, industry practitioners and investors, designers and research institutions have greatly accelerated their access to information. Playground designers also began to pay attention to children's behavior and psychology.
According to the different needs of children, the various types and functions of children's playground are becoming more and more rich. Based on children, the playground is designed to be safer, more challenging and interesting, and more suitable for children's physical and mental development, so as to create a recreation space truly suitable for their healthy growth. 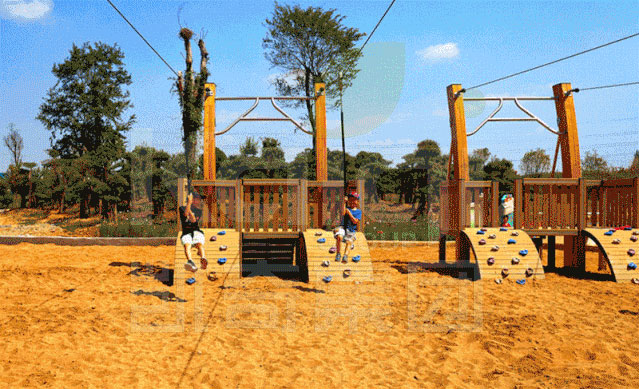 The prospects of playground equipment industry

1 The playground equipment has large potential in the cultural tourism market in the future
With the development of China's economy and the increase of national income, tourism behavior has become popular. Recently, the Ministry of culture and tourism officially announced that the number of domestic tourists in 2019 was 6.006 billion, a year-on-year increase of 8.4%, and the total annual tourism revenue was 6.63 trillion yuan, a year-on-year increase of 11.1%.
From the perspective of industry trends, China's tourism market has a huge space, the demand for national tourism continues to be strong, and higher quality requirements are put forward for products and services. 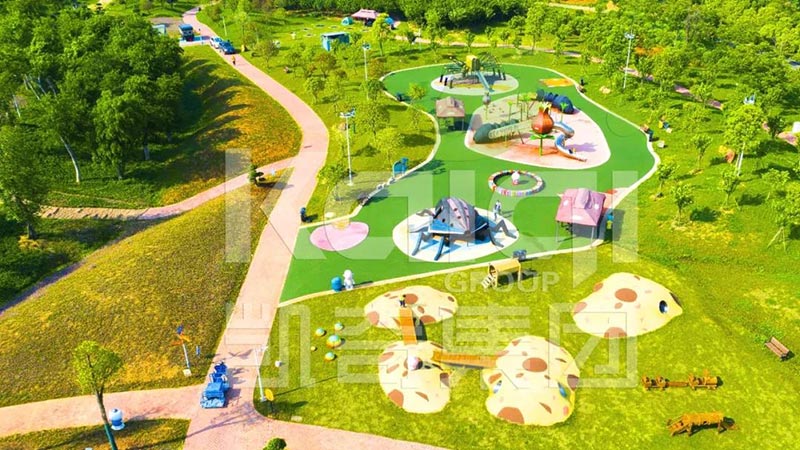 Under such market demand and consumption behavior characteristics, parent-child Playground park can meet all needs to the greatest extent:

First, a park in the excellent ecological environment in the suburbs of the city, which solves the problems of short outdoor activities and lack of understanding and contact with nature for urban parent-child families with the lowest time cost;

Second, professional playground equipment not only meets children's play nature, but also meets the learning needs of teaching in fun through the setting of special courses. While ensuring children's play, parents can also get leisure, relaxation and comfortable experience.

3 Parent-child playground park integrates urban and rural development
According to the statistics of the National Bureau of statistics, by 2018, China's urbanization level (urbanization rate) reached 59.58%, close to 60%. Compared with 17.9% at the beginning of China's urbanization process in 1978, it increased by 42 percentage points.
While China's urbanization rate is rising, it also exposes some development disadvantages of one-sided pursuit of urban area expansion and urban population growth, resulting in the scarcity of outdoor space suitable for parent-child activities in cities.
Therefore, people began to flow into the ecological spaces such as villages, farms, country parks and forest parks around the city. However, the development speed of market demand has greatly exceeded the renewal speed of outdoor products around the city. 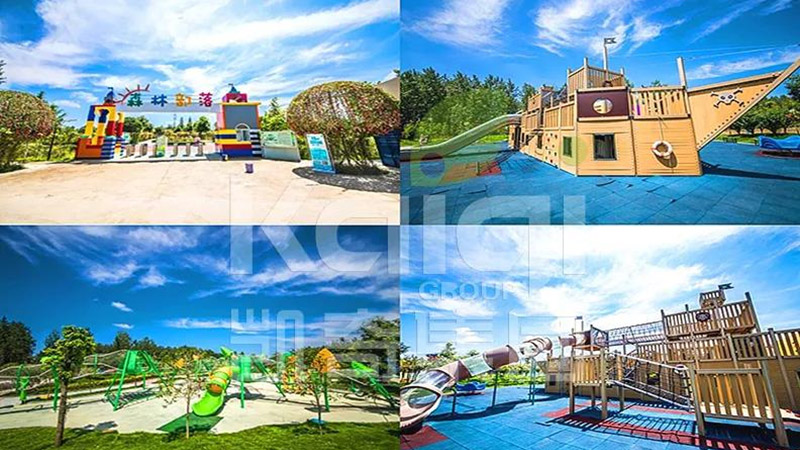 Under the development environment of the interaction of urbanization and anti urbanization, the parent-child playground park plays a role in meeting the needs of the market and provides urban consumers with high-value, modern theme design and high participation entertainment.

4 Playground equipment move from function to IP
China's cultural tourism industry has experienced from the resource led era thirty years ago to the market led era ten years ago, and then to the current IP led era.
As a carrier of highly aggregated value, IP connects online and offline through continuous cultivation and dissemination, connects product value and consumer demand, and integrates enterprise products and services into a value network through distinctive and systematic image and behavior, so as to accumulate and enlarge.
As a new cultural and tourism product, the traditional four basic functions of "crawling, swinging, climbing and sliding" realized by relying on standardized equipment are far from meeting the needs of consumers. 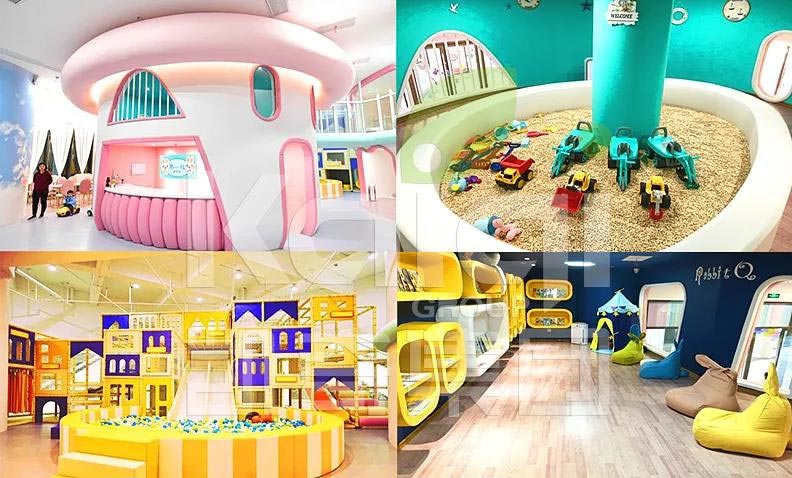 The parent-child playground park industry is enriching various unpowered parent-child recreation experiences with distinctive IP characteristics through different theme planning, shape design, concept extension, function integration, space overlap and other ways.
The development of playground equipment industry is inseparable from the support and promotion of the government and industry associations, as well as the formulation, supervision and implementation of industry standards. At the same time, it also needs the persistence and struggle of enterprises.

In order for children to have a happier and better childhood, Kaiqi will not forget its original intention, adhere to innovation, constantly explore, and lead the rapid and healthy development of the industry according to the requirements of the industry benchmark.

NEXT : Kaiqi group is pleased to move to the new R&D office building